There have been just two Iron man movies (but rumours of a third coming out soon). Both of the movies are great and Iron Man is played by Robert Downey Jr. who fits the character of Iron Man near perfectly. 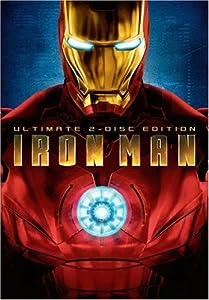 These movies are great, the first movie is really funny and it is rated 7.9 out of 10 in the mighty IMDb.com. This first movie allows us to see the how the invincible Iron Man amour was created. It’s an action packed film with a comic side and a great cast of actors (including the Amazing Stan Lee).

The second one was even better! In this return of the Iconic Armour, we see the Destructive War Machine, the deadly Black Widow and (my favourite) the commanding Nick Fury (this movie is one of the incredible movie stepping stones to the new Avengers movie). We see the same balance of action, excitement and comedy like the last movie but even more!

If you want these mighty movies, you can buy a new box set of the two amazing Iron Man movies for £21.99 (or a used one for £18.00) which is a good price! And this website allow has free delivery (and by the site, it will arrive in 2-3 days I think). On the other hand, we all don’t have a blu-ray player (I don’t have one) so then you can get a the separate DVDs but it doesn’t come in a box set but the first iron man is about £5.50 new and £2.61 used and the second one is about £7 new and used!

So If you want these DVD, I would suggest getting them off play.com because it’s a great bargain!